So shiny, you can count my fingers in the reflection. (Click pics to enlarge.)

The High Strength Titanium D-Shackle Kickstarter project by Allied Titanium recently invited backers to test out samples from their production run. Here’s my take on their 1/4″ shackle.

First, a quick summary of the many features:

Allied Titanium is a titanium product manufacturer and custom fabricator, and this line of D-shackles is their first Kickstarter project. As for me, I’m a long-time titanium junkie with more titanium than steel on my keychain. This is the fifth titanium project I’ve backed on Kickstarter, and I pledged for the 3/16″ and 5/16″ shackles.

In January, Allied asked for volunteers to perform user testing on samples from their production run. We were allowed to keep the sample shackle in exchange for providing pictures or videos of our testing1. I received the 1/4″ shackle, which ended up being the perfect size for what I had in mind. 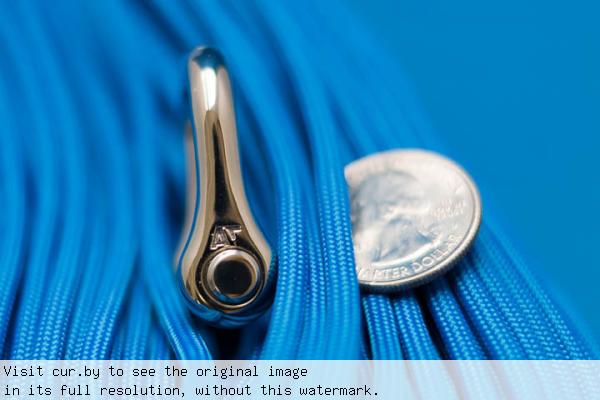 The leg with the Allied Titanium tattoo

Let me introduce the terms I’ll be using later so we’re all on the same page. Each D-shackle consists of two parts: the U-shaped body and the threaded clevis pin. The body ends in two parallel legs, both featuring holes tapped with internal threads. One leg has eight detents around the threaded hole and a “HS” stamp. The other leg has an Allied Titanium “AT” logo stamp. We’ll call these the HS leg and AT leg respectively. The clevis pin has external threads on one end and a flattened tab with a hole in it on the other end. A wide lip between the tab and the main shaft of the pin features ridges that fit into the detents on the HS leg.

As with most titanium products, it may appear plasticky if you’re used to steel hardware. The low thermal conductivity makes it comfortably warm in the hand, and the low weight makes it seem impossibly light for something made of metal. Of course, enthusiasts like me count these among the many benefits of titanium.

The shackle is exquisitely made, with a shiny finish that is simultaneously elegant (yeay!) and hard to photograph (boo!). The finish on the body has no burrs or pits that might snag or damage other parts or materials. There were some rougher surfaces where the pin meets the tab, visible in the photos below. The protrusions likely prevented the polishing medium from readily accessing those areas.

I noticed that the legs were not quite parallel; they leaned in towards each other as if something had squeezed it out of shape. Allied specifies the jaw width (space between legs) at 9/16″ or 14.3mm. I measured 14.1mm at the base of the body, but only 13.6mm between the ends of the legs. While the difference is minor, it may be contributing to some of the characteristics discussed below.

Traditional threaded D-shackles require external measures to truly secure them even after tightening the threaded clevis pin. However, these shackles feature ridges on the pin and a corresponding set of detents on one leg of the shackle. As the pin is screwed into the shackle, the ridges are pressed into the detents with ever-increasing force, effectively preventing the pin from gradually backing out. Depending on the application this may offer sufficient security, and mousing could still be added as with normal shackles. 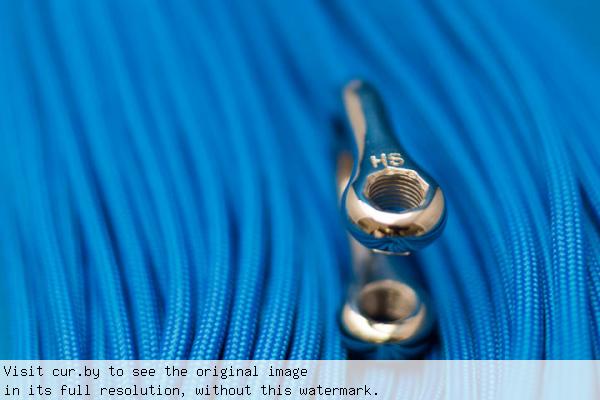 The leg stamped "HS" for High Strength, or Grade 5, titanium

For the 1/4″ sample I received, the pin turned smoothly until the pin’s tab was parallel to the legs of the shackle. By tightening the pin 45° further, the pin clicked into the first set of ridges and was held securely. With considerable effort, the pin could be tightened by hand 45° further, making the tab perpendicular to the legs of the shackle. At this point, a shackle key or other tool was practically required for removal. Likewise, a shackle key or wrench could help tighten the pin further for greater security. 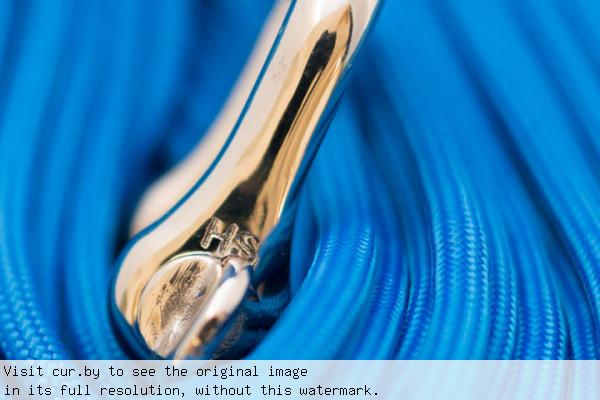 The last position where the pin could still work itself free. 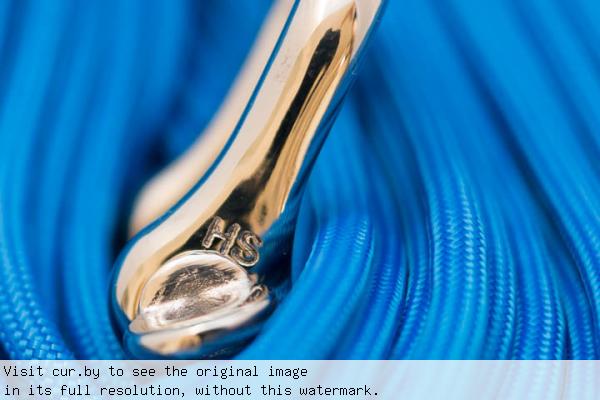 The pin is held securely after tightening one 45° click, and is unlikely to accidentally loosen.

By tapping both legs with internal threads, the pin is held by the HS leg even when the shackle is “open”. This is especially useful for maritime applications and other situations where a dropped part is effectively a lost part. As a troublemaker, I decided to see what would happen if I threaded the pin into the wrong leg, i.e. the AT leg. The AT leg accepts the threaded region, but not the unthreaded shaft. 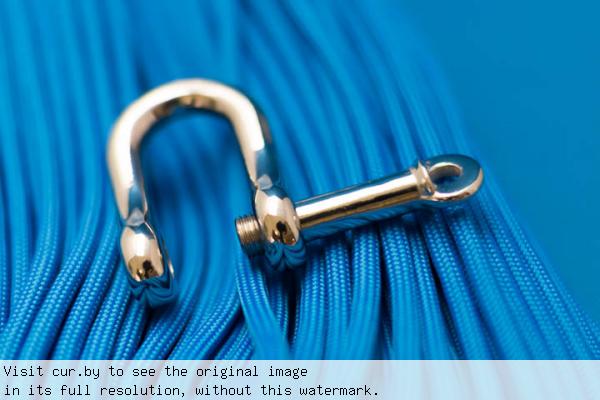 This is as far as the pin will go into the wrong hole.

As mentioned above, the legs of my sample are slightly bent towards each other. Tightening the pin has the natural side effect of pulling the legs together, but the body should spring back into shape when the pin is removed. In the sample shackle, the legs weren’t parallel even with the pin completely removed. This doesn’t seem to affect the performance of the shackle, but there are some consequences that may affect certain applications.

For a more streamlined form and to reduce snagging, certain applications may benefit from the shackle being “closed and locked” when the tab is parallel to the legs. As mentioned above, the pin’s tab is rotated past vertical to lock the tab in place. If the legs were truly parallel, the pin wouldn’t have to twist as much to reach a “locked” state, resulting in the desired parallel tab-to-leg orientation. That said, a wrench or other tool could be used to further tighten the pin until the tab is once again parallel to the leg.

With the legs closer together, the pin can screw into the body further causing the end to protrude slightly from the AT leg. For certain applications, the exposed, threaded end could increase snagging risk and wear and tear against other parts or materials.

I spoke with Chris from Allied and he said that this shackle is considered out of spec, and it would normally be replaced under warranty. He also said that overtightening of the pin should not cause this issue, as the titanium should spring back to shape after the pin is removed. Regardless, the shackle performs as expected and the pin rotates smoothly through the threaded legs.

Titanium threads are known for galling when placed under stress. Thankfully, the forces acting on an installed shackle are unlikely to contribute to galling. Additionally, the threads are cut well and allow the pin to rotate smoothly with only negligible hiccups from surface irregularities. Lastly, the chemical stability of titanium allows the use of practically any grease.

Compared to steel, one of titanium’s potential downsides is brittleness. Certain titanium products (from other manufacturers) have cracked or shattered due to deficiencies in alloy choice, component design, or manufacturing standards. Given Allied’s experience with titanium and load-bearing hardware, these shackles should not suffer from those problems, but I wasn’t able to test their resilience to mechanical shock in a controlled manner. Hopefully some of the other beta testers will be able to offer more strenuous test cases.

I have a pull-up bar hanging from an open loft in my house. A length of chain is passed through a galvanized pipe and tied to ropes hanging from the loft. I use water bowline knots for added security with the slippery synthetic ropes. Cheap, non-climbing carabiners prevent the bar from sliding along the chain.

Before: Ghetto gym equipment cobbled together from a hardware store.

For this application, the addition of D-shackles allows for easier removal and re-installation without the time-consuming process of balancing the lengths of the ropes. The locking feature of the shackle allows for a combination of security and ease of removal. The smooth, polished exterior of the shackle reduces wear on the rope compared to the rough surface of the chain.

After: I told you it's annoying to balance this thing. 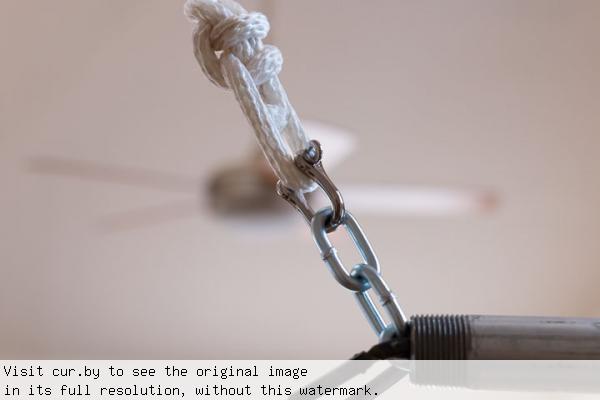 Behold the magical powers of titanium! (Ok, they're just chemical and mechanical properties.)

As expected, the shackle is more than strong enough for this application. After several sets of pull-ups, the steel chain has caused no noticeable wear on the body of the shackle. This page will be updated with further results as they become available.

The High Strength Titanium Locking D-Shackles from Allied are quite impressive. They offer extra security, painstaking polishing, and a lifetime warranty. The many available sizes mean they will be suitable for almost any application. While my test sample arrived with its legs slightly out of parallel, it performed just fine. Allied assured me that it was just a fluke, and any retail pieces with this problem would be covered under their warranty.

These shackles are expensive but not overpriced. Other titanium D-shackles cost over twice as much, and they have neither the polished finish nor the unique features of the Allied part. Whether you need titanium’s unique characteristics or just want a well-designed, high-quality D-shackle, these are worth careful consideration.